Rudolph completed his BA Fine Arts degree in 1988 and a BA Honours (Art History) in 1991, both at the University of Pretoria. He was the recipient of several bursaries and awards including the Norman Nossel Award (1985), New Signatures (1985, 1987 and 1988), Emil Schweickerdt Bursary (1987), HSRC and UP bursaries for postgraduate studies (1988), and a finalist at the South African Architecture Association’s awards for the design of The Yard (1997). From 1987 he held several solo exhibitions and participated in a large number of group exhibitions, locally and internationally. His work features in numerous public, corporate and private art collections.

Rudolph was an exceptionally gifted artist and craftsman, someone who could apply his brush or pencil with utmost creative self-assurance. He left us with a legacy of sheer amazement in the manner in which he applied his mark making on canvas and paper to convey intimate, imaginative worlds. With great skill his artist’s hand captured and marked the everyday, mundane moments in which he unobtrusively revealed himself to the viewer.

Rudolph passed away in Pretoria in October 2017. 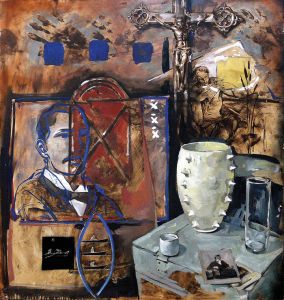